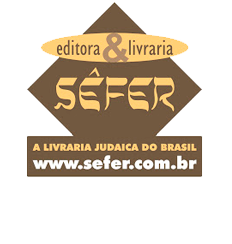 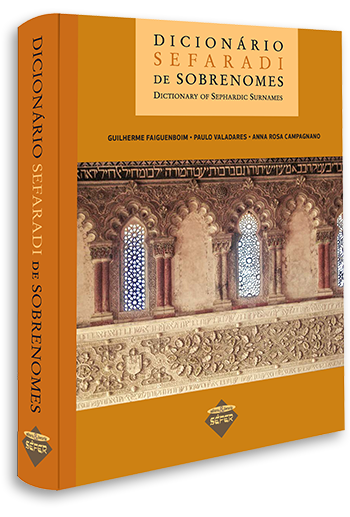 The Dictionary is back!

Including New Christians, Converts, Marranos, Italians, Berbers and their History in Spain, Portugal and Italy

Souza, Miranda, Pinto and even Silva. Surnames like these, typically Brazilian, could reveal, in their origin, a Jewish heritage. That is the result of the largest study ever done on the trajectory of Sephardic Jews, between the 14th and the 20th centuries, which, after many years of extensive research, was compiled into the Dictionary of Sephardic Surnames.

Already in its 4th edition, the bilingual work (English and Portuguese) is 528 pages-long (8x11 inches) and printed in text gloss paper, with a confortable round binding and luxurious finish. Written by Guilherme Faiguenboim, Anna Rosa Campagnano e Paulo Valadares, the book also presents a foreword by Marcio Souza.

Aside from the almost 16.000 surnames and 12.000 words, the book begins with a 120 pages-long introduction about the trajectory of Jews in Spain and Portugal from the year 700 c.e. until the Inquisition, narrating their destiny and the formation of Jewish communities in other countries, including Brazil, written by Reuven Faingold, Ph.D. in History at the Hebrew University of Jerusalem.

The second part, about the dispersion after the Inquisition, was written by Historian and Professor Paulo Valadares, owner of a Bachelor’s degree from Pontifical Catholic University of Campinas and a Master’s degree from the University of Sao Paulo, advised by Anita Novinsky.

The third part, written by Guilherme Faiguenboim, talks about Sephardic onomastics, explaining the etimology, transformation and morphology of the names, presenting the criteria used in the study and the classification of the surnames, as basic forms and variables, transliterations, languages and alphabets, sociocultural aspects, source trusthwortiness, statistics for comparison and source checking, name classification, metodology, among others.

This work was internationaly awarded the Reference Book of the Year Award for 2002 from the Association of Jewish Libraries.

Business administrator (FGV-SP), he lived for several years in Israel. Member of the Colégio Brasileiro de Genealogia (RJ), founding member of the Jewish Genealogical Society of Brazil and of the Brazilian Jewish Historical Archive. He participated in several Jewish genealogical congresses and is the author of works on genealogy.

Degree in History (PUC-CAMP) and Master in Social History (USP) under the guidance of Professor Anita Novinsky. Member of the Portuguese Genealogy Association (Lisbon), of the Colégio Brasileiro de Genealogia (RJ) and of the Jewish Genealogical Society of Brazil. He is the author of a hundred articles on the Jewish presence in the Iberian Peninsula and its diaspora.

Mathematics teacher in Italy, Nigeria and Brazil. Master in Hebrew with the dissertation "The Jewish-Italian dialects: a study on Baggito". Member of the Jewish Genealogical Society of Brazil and of the Brazilian Jewish Historical Archive. Author of the book of poems A Abraham's Tree (1993/94) and several articles on the arrival of the Jew-Italians to Brazil.

This work presents more than 16 thousand surnames of Sephardic Jews, preceded by the historical context that gave rise to the Sephardi and the New Christians.

In the first part, Professor Reuven Faingold examines the beginnings with the arrival of the Jews in the Iberian peninsula until the expulsion due to the Inquisition, and describes the mentality of the time, of both Jews and Catholics. This will allow the reader to understand the motivations of the two groups that culminated in the expulsion of hundreds of thousands of people who had lived there for more than 15 centuries.

In the second part, Professor Paulo Valadares narrates the Sephardic diaspora and the various destinations they encountered to escape the Inquisition.

Before the presentation of the entries, Guilherme Faiguenboim makes a brief explanation of the Sephardic onomastics of the different historical and linguistic timings, of the temporal geographical movement, and presents a list of the 250 most cited Sephardic surnames.

The attentive reader will notice the extraordinary saga of tens of thousands of Sephardic families over these six centuries, among Portuguese, Spanish, Moors, Berbers, Moroccans, Algerians, Tunisians, Turks, Syrians, Egyptians, Italians, French, Germans, Mexicans, Argentines and Brazilians, speaking in dozens of languages, writing in five alphabets and exercising a wide variety of professions.

Mention has been made of the recent Brazilian book "Dicionário Sefaradi de Sobrenomes" (Dictionary of Sephardic surnames). Having just received my copy I thought to share some of my early impressions because of the great interest in this publication.

This superb bilingual addition to the library of essential books for Sephardic Genealogy has 528 pages divided into several sections. The first section, dealing with a brief Sephardic history and explanations of Sephardic onomastics is printed on 150 pages of glossy paper, beautifully illustrated and reminiscent of an "art book". The right hand page is in Portuguese and the left hand in English, which - though translated by someone for whom English is obviously not a first language - is quite enjoyable and informative.

The remainder of the book, printed in non-glossy paper, consists of the dictionary of 16,000 Sephardic surnames. For this, the authors modeled themselves on Beider's Surnames of the Russian Empire, albeit with a few modifications necessitated by dealing with surnames written in a variety of alphabets and languages (instead of just Cyrillic), and covering a period of 6 centuries and 335 sources instead of the much narrower period and sources used by Beider.

The dictionary section presents the surname, some spelling variants, geographical locations, type (patronymic, descriptive, etc.), meaning of, and sources where found. The dictionary does not include the rich individual biographic data and name variants occasioned by country and language changes due to the mobility of Sephardic Jews over the centuries as found in Abraham Laredo's landmark "Les Noms the Juifs du Maroc". That would have required several volumes instead of one. On the other hand, Faiquenboim's book includes a much larger number of surnames difficult to find elsewhere and is a remarkable achievement for which we owe the authors a debt of gratitude.

I would highly recommend this book as essential in any serious library of Sephardic genealogy books.

author of "Sephardic Genealogy: Discovering your Sephardic Ancestors and their World", Avotaynu, 2002.

(...)I highly recommed this book as essential in serious library of sephardic genealogy books (...)

(...) In conclusion, I want to thank the Brazilian staff in there iniciative and successful conclusion of the project - with a great deal of gratitude and sincerity we say to them - Todah (...)

(Credit card details will be required)

If you prefer, you can make your payment directly through PayPal: